“Music straight from the heart”

Last Sunday – on the 22nd of October 2011 – the 14th International Henryk Wieniawski Violin Competition finished. It was fifteen days long – from 8th to 21st October and on the 22ndthe Prize-Giving Ceremony and Gala Concert took place.

Those who carefully followed the events of the competition know that this time was very exciting because of many incidents. Not only musical ones. They were able to see the contestants’ character and mentality in their playing style,  completed by their statements to the camera – a lot of interviews or their own advertising films. Fans could even meet the violinist face to face, take a picture, ask for an autograph and congratulate.

A short description – some important facts about the Wieniawski Violin Competition:

– the oldest violin competition in the world, has taken place for over seventy years (in Poznan since 1952)

– musical pieces by various composers are performed at each stage of the competition. There is music by, for example: Bach, Mozart, Paganini, Bartók, Beethoven, Brahms and of course Wieniawski. At the first stage violinists play solo, at the second – with the piano, at the third – with a chamber orchestra and at the final stage they play two concertos with a philharmonic orchestra.

– in 2001 the first prize winner was Alena Bayeva from Russia, who was only sixteen then!

– the XIII competition may be described as “Polish”, because the first and third prize was awarded to Poles. And accurately – two pretty and talented Polish ladies: Agata Szymczewska and Anna Maria Staśkiewicz;

I think this is the basic minimum knowledge of this competition. All Poznan citizens should know it at least because the competition is held exactly here.

This year I was very excited when the competition started. Every five years people who love violin music wait impatiently for this event. It’s a prodigious feast for the ear and unprecedented emotions – especially at the last stages, when the rivalry is very fierce.

At the first stage contestants have to perform a composition by Bach. They usually choose the Chaconne from Partita BWV 1004

(here you are, it is played by Maxim Vengerov. Unfortunately a little lousy quality, but… tough luck)

This piece is performed at each violin competition so I was quite unhappy when I had to listen to it six times at the first stage audition. Particularly because almost every one horribly abused our poor Bach. By the way, the prize for the best rendering of a work by J.S.Bach was  awarded to Maria Włoszczowska from Poland.

Apart from Bach, compositions by Paganini and Wieniawski and additional other composers were performed.

At the second stage it was much more interesting – the contestants played with the accompaniment of a piano and they had a wide range of musical pieces to choose from. There were funny incidents, too. For example – Aylen Pritchin lost his glasses on stage, Joanna Kreft dropped her bow. But there is no disguising the fact that the performer’s quality was very high.

The serious rivalry started at the third stage. Maxim Vengerov (chair of the jury) thought up an extra challenge. The violinist had to perform the first movement of Sinfonia Concertante in E major of Mozart with a chamber orchestra and a violist after one practice only! It was very difficult, because Simfonia Concertante is for a violin and viola in a duet – they need to arrange interpretation, and one practice is very, very little time for it.

Unfortunately I heard the performances played by Arata Yumi, Stefan Tarara, Soyoung Yoon, Aylen Pritchin and Maria Włoszczowska only, so I can’t compare them with everyone else, but in my opinion Stefan Tarara paired with the viola player best. They played as if they were one body and one instrument, every phrase was completed at the same way, their dynamics were a perfect match – with the orchestra as well. It was really a very good rendition which showed the immense musical talent in Stefan Tarara and Michał Bryła (violist). 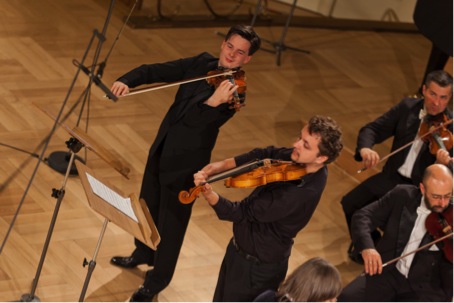 But certainly the best performer of the third stage generally was Soyoung Yoon, twenty-seven-years-old South Korean. She delighted me and other people (jury too – I’m sure) with her airy, skillful and confident play. Since this moment she became my favorite and didn’t disappoint.

Six contestants were admitted to the final stage – Arata Yumi, Soyoung Yoon, Aylen Pritchin, Stefan Tarara, Miki Kobayashi and  Erzhan Kulibaev. They are musicians of the highest order. It was a surprise that no Pole reached the finals. Since the beginning of this competition in 1935 at least one Pole was in the final stage. So you can see that the situation this year was a bit different and sad.

At the final stage there are two concerts to perform. It is a real test of resilience, competence and talent. Both a trial of strength and  an endurance test. Violinists obligatorily have to play one of Wieniawski’s concerts – D minor or Fis minor. D minor is  a passionate, lyrical, emotional concert while Fis minor is “beset with reefs of virtuosity”. On the first day of final auditions Soyoung Yoon showed what she can do and played concert Fis minor perfectly of intonation, technique and interpretation. Someone said that it was “charming, light, but the same time very true, natural and voluble”. I agree. Later she performed the concert D minor of Sibelius (very difficult and glamorous). Her interpretation was the greatest I have ever heard in my life. She played strong sounds, but almost delicately, movingly, magically; with musical knowledge, virtuosity fantasy and liberty. In short – awesome! She received standing ovations and, I think, the time we already knew who would be the competition’s winner.

At last, after stressful anticipation, we learnt who is the first, second and third prize winner. It wasn’t a big amazement, but some people had objection with the third prize. I don’t want to quarrel, even though I was quite surprise when I heard that Erzhan Kulibaev  only got a distinction. But I ascertained that I’m not such an expert as the members of jury and I didn’t hear every violinist at every stage, so I can’t judge after final performances only. And I finally agree with the jury. 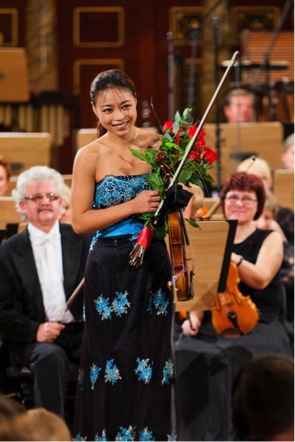 Above you have pages where you can listen to all compositions in performances of winners. Enjoy!